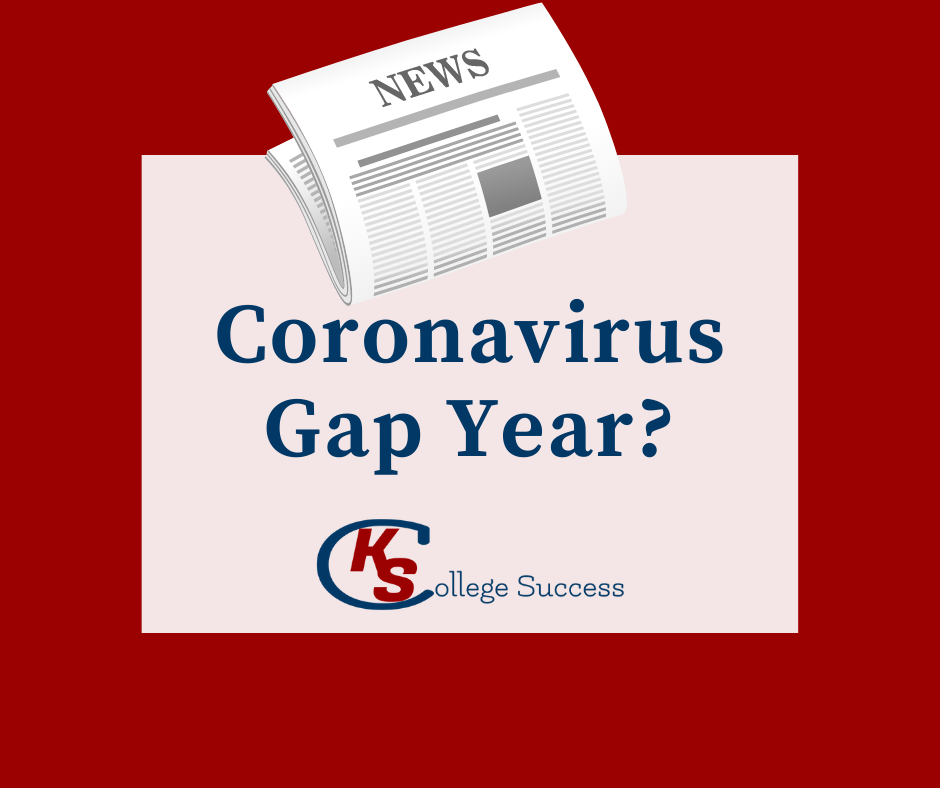 Posted at 15:02h in Uncategorized by Katharine Sonnenberg

I was delighted to be interviewed for this article addressing the coronavirus college gap year. As I state in the article, students who take an intentional and purposeful gap year can thrive, but those who take a gap year that is not well-planned can stall. The article is a six-minute read and does an excellent job laying out what to think about if your child is considering a gap year:

All of these new rules to combat the spread of the coronavirus in the close quarters of college campuses will undeniably upend a traditional college experience, which thrives on contact with new people each day.

So some students have decided they would rather take the year off than move into an uncertain semester on campus. Even as some schools plan to open (for now), Rutgers University has said it will stay mostly remote, while Princeton University will allow students to come back to campus for one semester: freshman and juniors in the fall, sophomores and seniors in the spring.

In April, some 16% of college-bound students said they planned to take a gap year due to concerns over the coronavirus, according to a poll conducted by Art & Science Group in collaboration with the College Board. With the fall semester less than two months away, it seems more students have committed to state schools in New Jersey, at least, with several reporting just small drops in freshman enrollment.

“With this year in particular, what we’re seeing is many more students thinking about taking a gap year who weren’t even considering it,” said Holly Bull, president of the Center for Interim Programs in Princeton, which provides counseling for students seeking gap year opportunities. With online learning and campus restrictions, “it’s not their picture of what they were going to be doing their freshman year. It’s bringing in way more people than we expected.”

Bull said the program is packed with interested students, many of whom come from states in the Northeast, where some schools have already announced they will not open fully for the fall.

Eileen Huhn, a rising junior at Georgetown University, came home to Montclair this spring when the Washington, D.C. campus shutdown. But she said finishing her Russian courses online as her three younger siblings took classes online was not worth tens of thousands of dollars in tuition.

Then her summer trip to St. Petersburg got canceled. An immersive language program turned into a few hours a week of speaking over Zoom. Worried about repeating the pattern this fall, she’s taking the fall semester off, instead looking for internships that allow her to practice Russian for more than just a few hours a week.

“I feel like it’s a lot of money, and you have only a little bit of time to be in college and just learn,” Huhn, 20, said. “I would be better off trying to find an internship that will let me do more Russian than two hours a week.”

Each year, students make choices like Huhn’s. But now, gap year offerings have changed due to the pandemic, too. Those considering going abroad must shift to smaller groups, and face uncertainty based on travel restrictions. Some other programs or internships have moved online. And available domestic programs have seen capacity crunches as newly-interested students apply for fewer slots.

And a gap year is more than just a pause before or during college.

For students experiencing economic burnout, or those hoping to learn a skill or explore a new culture, gap years can be transformative, she said. But for those who only want to wait until college campuses open to experience traditional campus life, with fraternities and sororities and parties, they might not have a positive impact.

“Kids that do a purposeful and intention gap year, they go to college refreshed, they have higher GPAs, they graduate on time,” she said. “Kids who do nothing can stall.”

Sonnenberg said she mostly saw an uptick in interest in gap years, particularly from New Jersey students in March and April. But that did necessarily translate to action, and many have decided to still attend colleges, given the unknowns.

Some schools have seen their enrollment for the fall drop.

Rutgers University faces a 3.4%, or about 350 students, drop among freshman, enrolling 9,638 so far, according to Dory Devlin, a university spokeswoman. The university plans to keep nearly all of its classes remote and strictly limit on-campus housing.

“We are actually really quite pleased given the range of possibilities,” the school’s president, Jonathan Holloway, said during a press conference last week. “There is no doubt that the number will increase.”

Transfer students moving to Rutgers have also decreased by about 1.2%, Devlin said.

At Rowan, which has scholarships for freshman willing to take all their courses online, enrollment is up by about 400 students overall. Freshman enrollment is down by about 6%, but transfers and international enrollment have increased.

Jeff Hand, vice president for enrollment, said the university expected enrollment to drop in the next four years after growing, and uncertainty around the coronavirus has likely led some freshman to hold off.

“We are experiencing first-year students wanting to take part-time classes in the fall rather than a full-time course load, he said.

At Stockton University, freshman enrollment is down 60 students, or about 4%, compared to the previous year.

“We do have some students who have indicated they are taking off for the fall semester or they are opting to start online only at their local community college,” Diane D’Amico, a spokeswoman for Stockton, said. “We continue to promote to students that we expect to have options for both in-person and online courses for the fall as well as housing for all students who need it.”

But at Montclair State University, the virus has had the opposite effect.

Freshman commitments are up 1.5%, said Andrew Mees, a spokesman for the school. The number of transfer students has also increased by 7.9%, said Jeff Gant, director of undergraduate admissions. That likely comes from more students deciding to stay in-state, or come home, based on uncertainties around traveling and the need to save money.

He said his department has heard from many students and families who intended to go out-of-state, but have decided to attend Montclair instead.

“This is an interesting moment for New Jersey residents to really step back and consider the value of their state institutions,” Gant said. “Folks are really realizing what they have at home right now.”

Some students have held out hope their campuses will reopen and life will return to normal. But those hopes seem to slip further as each day draws closer to the start of the semester.

Sonnenberg said many students have realized there is no perfect solution: neither college nor gap years will look the same.

“What I have been advising the students who talk to me specifically, your reasons for taking a gap year now, should really be no different than taking a gap year the year before,” she said. “I would hope that sitting at home is not something people would choose as their default.”

Our journalism needs your support. Please subscribe today to NJ.com.