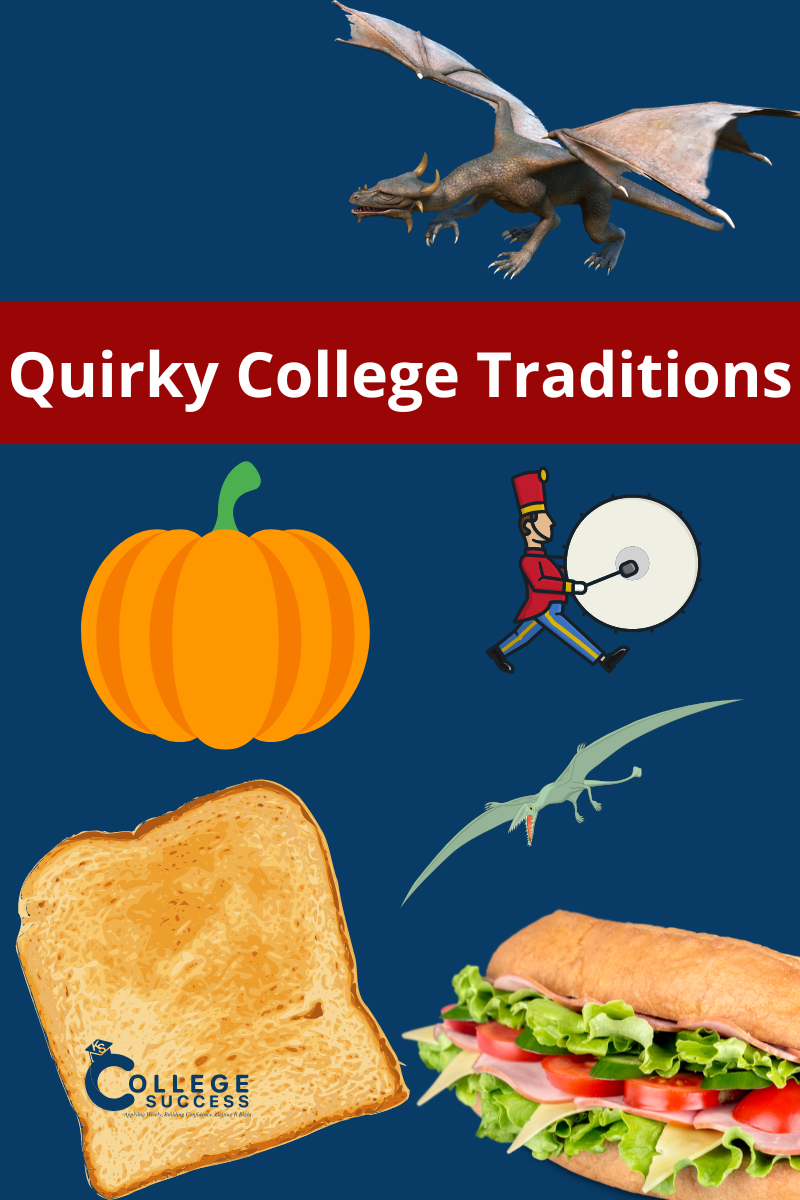 Posted at 09:30h in Uncategorized by Katharine Sonnenberg

College students will be submitting their early decision or early action applications in the next two weeks . . . and finalizing their college list for regular decision deadlines. While quirky traditions may not be a reason for students to apply (or not apply) to a college, here are a few of my favorite traditions at some of my favorite colleges. Since many of them involve spooky themes or screams, Halloween Eve seemed an appropriate time to share. Please let me know about any you love, and I will include them in next year’s blog post.

While the origins of this tradition are unknown, every October the cerebral women of Barnard College devour a 700+ foot-long submarine sandwich. Assembled into sections featuring different fillings for all (from roast beef to vegan to kosher), and taking up several New York City blocks, the Big Sub is gone in under 10 minutes. As Barnard puts it, “from feet to inches in minutes.”

Swarthmore students’ October tradition is a little different: dressed in either white or black garbage bags and armed with foam swords, Swatties gather to defend their campus from invading monsters. Coordinated by the Psi Phi Club, students are divided into hunters or monsters, and although there are strict rules and protocols to follow (depending on the character to which a student is assigned) the event usually devolves into students running around and bopping each other with their swords.

Cornell students have their own traditions with fanciful animals. Dating back to 1901, and originally a rivalry between engineering and architecture students, every March first-year architecture students build a giant dragon and dress in costumes, they parade it around campus on the Friday before spring break. Joining in on the fun, engineering students construct an equally giant phoenix that battles it out with the dragon. While the burning of the dragon is no longer permitted, this rite of spring is a beloved Cornell tradition.

An annual Halloween tradition, MIT students drop pumpkins from the roof of the 295-feet high “Green Building,” the tallest building in Cambridge. According to MIT, the pumpkins drop at such a high velocity they explode into puffs of smoke on impact (although it takes several hours for students to clean up the pumpkin debris). In MIT fashion, students not only watch the pumpkins explode but put their math minds to work determining the velocity of the fall under various conditions.

Georgetown students have put their own spin on Halloween every year since 1973, paying homage to The Exorcist which was partly filmed on the campus. Costume-clad students screen the movie at a cemetery near Healy Hall (a national historic landmark and the flagship building on the Georgetown campus) and scream whenever Georgetown appears in a background shot of the movie. At the stroke of midnight, students venture into the cemetery to howl at the moon.

Carleton students also have a screaming tradition: at exactly 10:00 pm on the night before finals start, students lean out their windows and scream (or wail) as loud as they can, supposedly to “blow off steam” before hunkering down for a final bit of studying. This offsets another finals-related tradition: at 11:00 p.m. on one of the two reading days preceding final exams, students gather on the first floor of the library, don their headphones, and press ‘play’ to a pre-recorded, hour-long playlist. In silence, the dance party moves from the library to various locations around the campus.

Columbia students enjoy a not-so-quiet serenade on the night before the organic chemistry final exam (always held on the first day of finals) when the marching band plays to entertain students studying for the notoriously hard final. The twice-yearly “show,” originally held in Room 209 of Butler library, is now outside due to an administrative ban and some hefty fines.

Emory students also invoke the dead – this time a skeleton from the biology department named James W. Dooley, but better known as the Lord of Misrule. On an unspecified spring day, the skeleton walks into classrooms and dismisses classes for the entire university. The administration treats students to a “day of fun,” although in recent years it has turned into a week-long spirit celebration.

An update to the tradition of downing a toast when the band plays “Here’s a toast to dear old Penn” in the fight song “Drink a Highball” at football games (not possible after UPenn banned alcohol at the stadium in the 1970s), today Penn students toss burnt toast onto the football field as the third quarter begins. Needless to say, the 20,000 to 30,000 pieces of toast thrown at each game makes quite a mess, but inventive Penn students found a solution: a Toast Zamboni.

While most college students receive their diplomas when their names are called as they walk across the stage, the women of Smith College receive the diploma of a random classmate. After all the grads have diplomas in hand, they walk to a field and form the Diploma Circle. In a century-old tradition, the women stand in concentric circles, and diplomas are passed from student to student until each graduate has their rightful diploma.